Skip to content
Advertisement
How To Five Important Hails

In the heat of competition, what you say is as important as when, and how you say it. 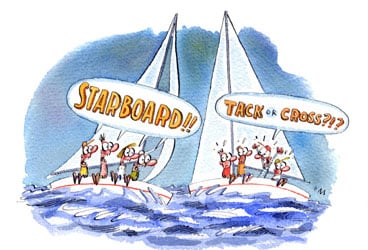 The editor recently asked me to write a column about hails. Hails (i.e., “Starboard!” “Room!” or “Leeward boat”), while useful, are not required by the rules. But there are several ways in which a hail can be helpful. A hail will often save you from becoming involved in a rules dispute or contact with another boat. Almost invariably, contact and heated verbal exchanges will slow you down and distract you from the primary tasks at hand—maintaining maximum speed toward the next mark, picking the best track through the wind and current, and paying attention to your tactics. A courtesy hail can often help avoid a trip to the protest room, and occasionally a hail can confer a tactical advantage.

Before I list my favorite hails and when to use them, let’s cover how to hail. In an emergency situation, when a serious collision is about to happen, any member of your crew should be authorized to hail whatever words might help avert damage. However, 99 percent of the time there is no emergency and the decision whether to hail and what to hail should be made by one person on your boat—usually the helmsperson or the tactician. The main reason for this is that you can get yourself in trouble if your hail is not consistent with your plan of action. For example, on a beat, if you are on starboard tack approaching a boat on port, a hail of “starboard” coming from your bowman signals to the boat on port that you intend to hold your course and expect the port-tack boat to keep clear. However, if port then bears off to duck you and you tack right in her path, you risk a collision and probably a messy protest involving Rule 16.2.

In a moderate breeze, when the boat you’re hailing is close to you, your “hailer” can simply make the hail himself, adjusting the volume of his hail to make sure he’s heard. However, there will be situations when it pays to make a louder hail than just one person can make. In that case, I suggest the “hailer” alert the crew by saying, for example, “On the count of three we all hail ‘Starboard.’” Then he can count down to coordinate the hail. This would be appropriate when the wind, waves, or luffing sails are making lots of noise or when the people you’re hailing are wearing hats or hoods that cover their ears. It’s also a good idea to hail very loudly when you want your hail to be heard by other boats in the vicinity to draw their attention to the forthcoming incident. This may increase the odds that you’ll be able to find a witness able to testify to what happened and to the words you hailed.

Finally, a loud hail can serve a tactical purpose. Here’s an example. You’re on starboard on a collision course with Eddie on port. You want to continue on starboard. Eddie has limited visibility because he has a genoa set and his entire crew is on the weather rail facing to weather with legs over the side. You don’t want Eddie to tack close under your lee bow. By having your entire crew hail “Starboard” in unison as loud as they can, the loudness of your hail may lead Eddie to think you’re much closer to him than you really are. Eddie may well tack immediately, enabling you to continue on starboard with Eddie well outside the lee-bow position in which he would force you to tack away. It’s worked for me many times.

Now, let’s get to my list of the five most important and useful hails:

• While sailing back and forth below the line before the start, hail “Starboard” when on starboard approaching boats on port. Some of the most costly collisions occur during this period when crews fail to pay attention to approaching boats.

• Hail “Starboard” or “Leeward boat—keep clear” when ever you have right of way under Rule 10 or 11 and there is any possibility that the other boat may not see you or may be getting too close.

• When tacking into a close leebow position under another boat, hail “Tack complete—close-hauled course” the instant you are on a close-hauled course. This establishes the moment at which you are no longer required by Rule 13 to keep clear and you acquire right of way under Rule 11 or 12.

• When you’re approaching the mark, usually the committee boat, at the starboard end of the starting line to start and another boat is overlapped with you on your windward side, hail: “There will be no room for you between me and that mark.” Make your hail firmly, authoritatively, and well before you reach the mark, so there is still time for the windward boat to luff up and pass the mark to port. If you wait until the windward boat is unable to avoid passing the mark to starboard, she will have succeeded in barging her way between you and the mark.

• Approaching a mark, if you are definitely clear ahead of a nearby boat, hail “No overlap” to her when you are about six lengths from the mark—well before you reach the zone. Similarly, if you definitely have an inside overlap on a boat well before the zone, hail “Overlap” to her at that time. These hails can be helpful in two important ways. First, they establish your position at a time when the overlap between you and the other boat either clearly exists or clearly does not exist. Then, if the other boat later claims to have obtained a last-second overlap or to have broken an overlap just before the zone, the onus rule (Rule 18.2(d)) will favor you should you end up in the protest room. What’s more, your hail will almost always distract the other boat’s crew and lead them to say something like, “Hey, we’re no where near the zone!” You may find that the distraction buys you a gain of a few feet.

In many fleets these days, the hail you hear most often is, “Tack or cross?” It’s most often made by a port-tack boat on a windward leg that would like to cross in front of a starboard-tack boat, but isn’t sure she can do so without forcing the starboard-tack boat to alter course. The hail is shorthand for “Waive me across your bow and, if need be, bear off to let me cross. If you don’t, I’ll leebow you and force you either to tack away or to live in my bad air.” If the starboard boat wishes to continue on starboard, it makes sense for her to respond to the hail by hailing, “Cross” and signaling to the port-tack boat that she may cross ahead. If you waive her across, it is my opinion that you must let her cross and not protest her, even when you have to bear off to do so. Failure to let her cross or protesting her might leave you open to being successfully protested for breaking Rule 2, Fair Sailing.
You are, however, under no obligation to waive port across. You may sail on without responding at all. In that case the port boat is required by Rule 10 to keep clear of you. If you don’t wish to waive port across, I recommend that for safety and clarity you respond to port’s hail by hailing back “Starboard—keep clear of me.”