Skip to content
Advertisement
Racing Mechatronics in the America’s Cup

Mechatronics in the America’s Cup

Much of the magic of a big foiling monohull is in the precision controls and elaborate systems required for takeoff and flight. Here’s a guide to what’s happening under the hood of American Magic’s AC75. 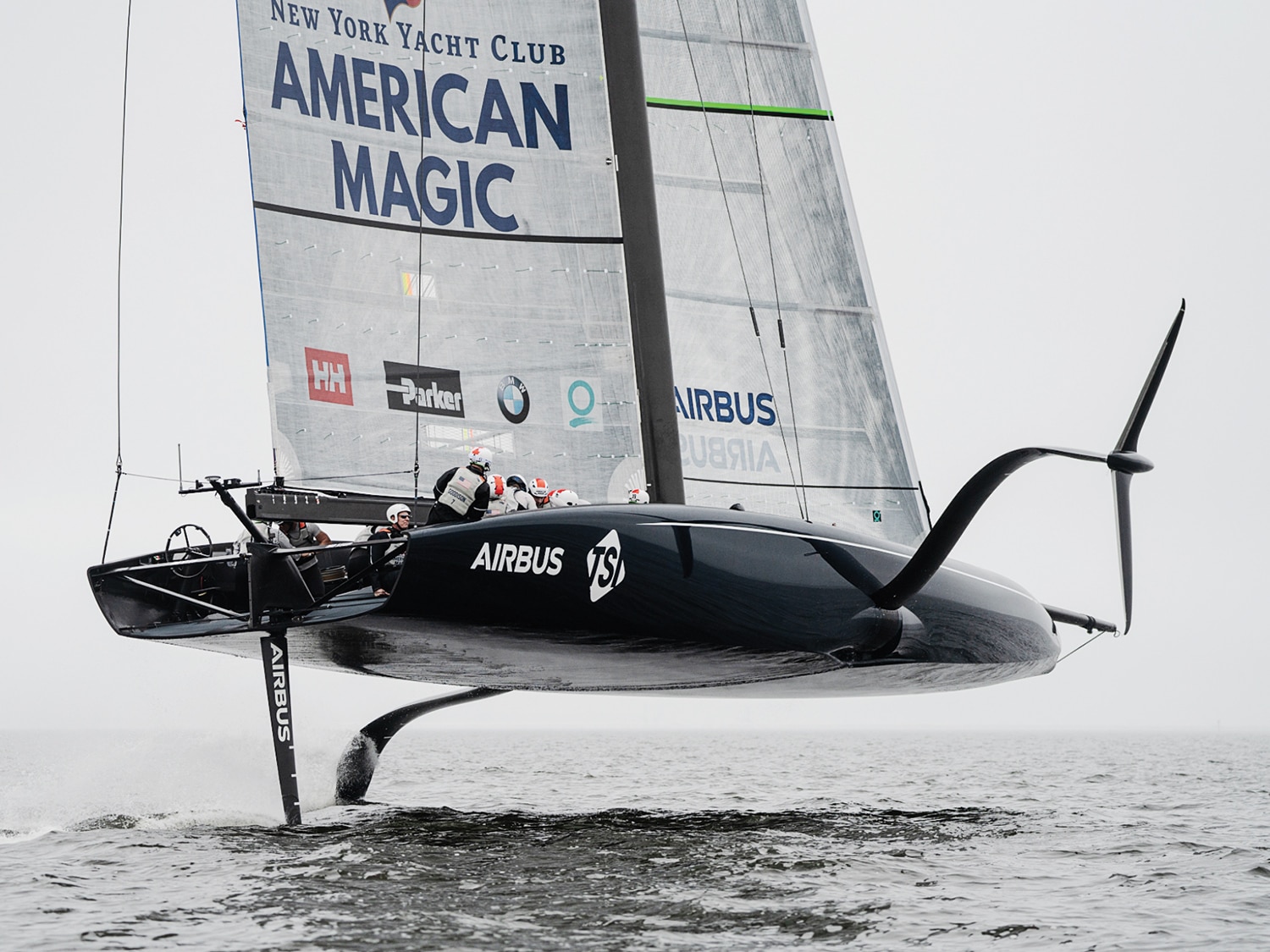 “Mechatronics engineer.” That’s one job title that never existed back in the America’s Cup’s 12-Metre era. But today, every Cup team has a few on payroll. These are the unknown wizards tasked with ensuring that every adjustment on the AC75 is precise. From micro to macro, from the top of the rig to the tip of the foil flap, when and if someone presses a button or pushes a toggle on these complex flying beasts, something logical better happen, and it better be right. Such is the new high-tech domain of modern America’s Cup ­sailing, one in which software, hardware, electronics, hydraulics and human input interplay through intricate systems.

“It is the crux of performance,” says James Lyne, head coach of the New York YC’s American Magic challenge. “The Cup can be won or lost in these control systems.” Lyne, who analyzes every move and every adjustment the American Magic sailing team makes on board its AC75 Defiant, can see through 14 onboard cameras and a deluge of data streamed from the boat just how important this business of mechatronics is to getting up to speed and around the race track.

Let’s start with the big picture: Who does what on the boat?

We’ve split up the tasks of controlling the boat. Dean [Barker], the helmsman, has control of the wheel and various things, but his primary role is to steer the boat around the course. Paul [Goodison], as the mainsail trimmer, controls the shape of the mast and the [twin-skinned] mainsail. He also has some control of the jib. Andrew Campbell is then, ­effectively, in control of flight. From his position, he controls the foil cant, foil flap and ­rudder rake. Other people can also control those functions, but 99 percent of the time, three people effectively have control of the boat.

That leaves eight grinders, and one of those is a tactician. The tactician is talking about the course and the options, so in that sense, we’re set up a bit like a traditional boat. All the grinders are doing is, as they say, “We grind forward and then we grind backward.” It’s an oversimplification, of course, because these guys are electronically changing gears and choosing functions depending on the task at hand.

The grinders are ­essentially running who’s in what and how much power to put in at any moment. If they choose the wrong function at the wrong time and let oil pressure get too low, the boat will get unbalanced quite quickly, and the flight controller and the helmsman can’t do anything about it. Nothing ­happens on these boats without hydraulic pressure.

How many control buttons do the grinders have to manage while also hammering away at the handles?

It’s traditional in that they’re using foot buttons, but they’re electronic rather than mechanical. When you look down into the cockpit, into all the grinding stations, you’ll see there’s an array of buttons. The jib trimmer has at least six [foot] buttons just to himself, from the engaging of the winch, to the jib cars and the up-down systems that affect his sail shape. It’s like a dance/game for them because they can’t be off the handles for any lengthy period of time. We need a certain amount of watts, on average, to power the boat.

The grinders are producing almost what a professional cyclist would produce, over a relatively short period of time. We’re asking these guys for more than 200 watts on average, with spikes of nearly 1,000 watts on special occasions where they need to dig deep.

So, what’s happening, systems-wise, when a foot ­button is engaged?

When they press a button, an electronic signal is passing to a programmable logic controller, which is programmed to control the opening and closing of hydraulic valves or ­mechanical mechanisms to achieve a given function. For example, are they straight into a winch, or switching to fill an accumulator tank or drive a hydraulically controlled sail function? Are they behind in how much oil they’re producing? When they’re coming to the boundary and they have to jibe, if they’re low on oil, it’s not going to be pretty. Paul, Dean and the trimmer are the primary consumers of the energy, and the grinders are choosing how that energy is allocated around the boat.

I can imagine there is quite a ­complex web of hoses, pumps and rams below deck.

When you look inside the boat, it looks way more like the inside of a plane than it does the inside of a boat. It’s impressive. You’ve got a lot of electronics, a series of pumps and hoses to produce and supply pressure, and tanks to store high- and low-pressure oil. Without the high-pressure tank/accumulator, there are moments around the racecourse where it’s impossible to generate enough grinding power to meet the demands of the boat, so we’re always asking the hydraulic system to be more and more efficient.

When people look at the boat, it looks sort of traditional in that there’s an outhaul, a mainsheet and jib sheets, but the big difference is the forces this boat generates are so big that the whole boat would have to be one big purchase system just to do something as basic as trimming on the mainsheet. We have to handle tons of mainsheet load, so that’s why the systems are dominated by hydraulics. These boats produce so much righting moment that the loads on all the sail-control systems—never mind the foil-control systems—are more similar to a 120-foot multihull, in terms of righting moment.

How much of all of this can be automated with software?

The class rule is pretty ­stringent on how we can use feedback loops in our software systems, but everything has to have logic. For example, when Paul pushes a button or a lever on his control box, there is logic running in the background to translate his input into a valve command, or series of ­commands that perform ­multiple functions at a time. Trimmer Paul Goodison has complete control of the complex rig at his fingertips using the controller. The goal is dry laps, since touchdowns at 45 knots are undesirable. Amory Ross/NYYC American Magic

Let’s put the boat in motion. What’s the sequence of ­mechatronic events to get the boat flying?

The AC75 is unique because the boat has no effective initial stability. It gains stability only when it gets flow across the foils. In light air, we can hip-tow the AC75 [with the tender] up to a speed of around 7 knots, where they have steerage and some semblance of righting-moment flow out of the foil. Then we spike the side tow off and they fall off onto whichever tack, ease the sails, and then slowly accelerate the boat.

As they accelerate to about 10 knots, the boat starts generating quite a lot of righting moment from the leeward foil. At this point, they can start sheeting on the sails. They’re always trying to balance the righting moment generated by the foil versus the aero load of the sails to allow us to get to takeoff speed. Where takeoffs can go bad is when they’re either producing too much righting moment versus aero lift or vice versa.

Takeoff, in other words, is a delicate balance between the forces, so one moment they’re sort of sailing in displacement mode at 12 knots or so, and there’s not a lot of load on anything. Once they’ve taken off and they’re doing more than 20 knots, all of a sudden, the loads on the boat increase by a factor of 10.

Explain what’s happening when we see the massive foil arms set in motion.

Andrew, as the foil trimmer, has control of the cant system, so as soon as they’re off the tow and at a decent wind angle, he brings the windward board up, which increases righting moment and gives them the ability to take aero load very early on, while they don’t have a lot of foil load. Then, he effectively puts the leeward board to a target cant angle, which at that time will be set up to provide the right amount of lift and side force for the acceleration. The foil-cant system is one-design; it is run by a battery, so the grinders don’t need to power it. All we have control over is when it moves and how much it moves. The rams are big gears, and as you would imagine, the amount of load the foil arm and the cant system sees is incredible.

How much control then do you have of the active leeward foil when it’s loaded?

We use it dynamically, though the adjustments are relatively small. Think of the foil cant as a gross adjustment and foil flap as the ride-height control.

The accumulator tank volume is one-design as well?

Yes. It’s about a liter and a half, which is hardly any, so that’s why you see the grinding team working the whole time, from the moment they come off the tow to the moment they’re back on tow.

One challenge of the catamarans of San Francisco and Bermuda is the transfer of crew during maneuvers, which is less of a factor with the AC75, right?

There are all sorts of things that must go right with every maneuver. The rates of the maneuvers are very similar to the boats in Bermuda, so for most people, it’ll appear to be a pretty fast rate of turn. There’s a big onus on producing aero lift into and out of the tacks and jibes. They can turn too fast and skid out, which means all of sudden there’s no flow over the foils. So, there is a limit as to how fast they can maneuver.

As far as crew moving from side to side, some teams send people across, while other teams don’t. We’re still working on who goes where, but compared with the AC50, there are fewer people moving through the tack. The people who are moving, however, are the most important, so that makes it relatively tricky, and that’s where the efficiency of every system has to be right.