Dave Reed chimes in from Annapolis, Md., where our Boat of the Year judges are putting 17 new boats through the paces. 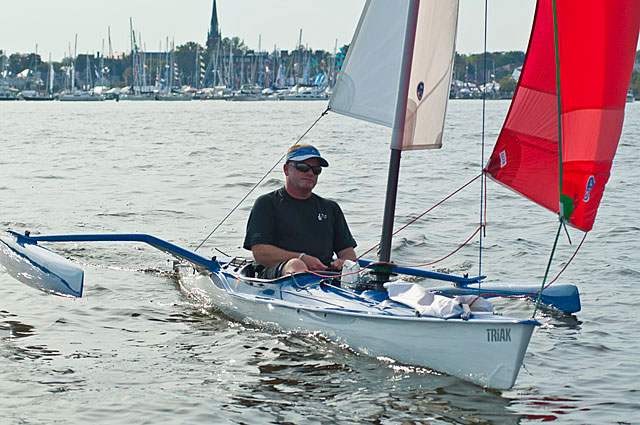 The 2010 U.S. Sailboat Show in Annapolis, Md., is ancient history—a harbor once crammed with sailboats is now wall-to-wall powerboats sitting in for the upcoming powerboat edition of the show. The Cheseapeake Bay, too, has been a hive of demo sails and boat tests, with would-be customers and magazine editors doing the annual post-show dance. Sailing World’s own Boat of the Year judging panel has been in the sail-testing business since Monday afternoon, working its way through nearly 20 new boats. We’re finding we’ve got an eclectic mix this year, and after only a handful of boats, we’ve seen some pretty wild stuff, both good and bad.

The way our Boat of the Year testing works goes something like this: manufacturers enter their new-model design; we check that they’re legit (as in new, not modified); then we put our judges onboard to see if each boat lives up to its claims; they inspect, and they sail. Sometimes it’s light, sometimes the breeze is cranking, but either way, every boat gets its fair shake. I’ll pass along a few first impressions here, but I can’t tip the BOTY hat just yet—you’ll have to wait for our January/February 2011 issue.

First on tap was the Dragonfly 28 Sport. If you want to see how well the Danish builders make their folding trimarans, check one of these out for yourself. Put up the spinnaker, and you might just be converted to the tri-sailing crowd.

Next on the list was a last-minute entry. Literally. Less than an hour before the show’s official close at 5 p.m. Monday, we convinced the sales team at Triak Trimarans (San Diego) that they should have their aggressive-looking sailing trimaran/kayak join in and be counted in the BOTY scheme. They agreed to our boondoggle of breaking down the boat into its parts (main hull, amas, wing-like aka, and mast) and carrying them through the crowded show to an empty dock. Once we had the thing reassembled, our veteran judges jumped into it one at a time. Designer Greg Stewart, builder Barrett Holby, and sailmaker Chuck Allen had their way with her, and came away impressed by what the pint-sized sailboat could do. When you put a sail on a kayak, kayaking finally starts to make sense (to me at least): when you get sick of paddling, deploy the battened sail.

The next boat we squeezed in before sunset was the meter-esque Class 2M, a narrow, bamboo-decked one-design startup from France. The boat won “Best in Show” at the Newport Boat Show in September, and my guess is that the ribbon was given purely on the boat’s good looks. It’s unique for sure, and it’s one of those boats you have to sail before you give in to the hype. After more than an hour, the judges were surprised by how well it sailed. Once it leaned onto its long chine, it came alive. A dark horse? Perhaps.

The Tangara, a classic-looking, cold-molded daysailor built in France and imported by Forum Marine in Texas, had the following test slot. It’s got a fast-looking hull shape from an unknown designer, and a style that’s more kick back, jib-and-main weeknight racing than anything else. The general agreement amongst the judges, however, is that it sailed really well in the light air we had. But it being the first Tangara, there are construction details that need to be adressed for it to be an overall Boat of the Year winner.

As they were wrapping up with the Tangara, the **J/111 **from J Boats showed up on time for its high-noon appointment, and as if on cue, the breeze bumped up a few knots. Excellent sailing, said each judge afterwards. “That’s definitely a contender.” Maybe the best boat from J Boats yet—even better than last year’s J/95. It’s definitely a frontrunner, but there are still plenty of boats yet to sail.

For the following few hours, we witnessed a dinghy sail-off between the RS 100, a singlehander imported from England, and the Raider 2, a Florida-built doublehander with a three-sail inventory. The RS 100 is a tricked out little boat for 11K. Since March of this year, they’ve turned out nearly 200 of them in Europe. It’s a pretty radical looking dinghy, but one you can jump right into and figure out. Where other two-sail singlehanders have failed before, the RS 100 has pulled off something pretty incredible. The Raider proved to be a quick boat, but its sail-control mechanics can use some reengineering.

The third boat of the late afternoon was the Scandinavian 20; think part Dragon, part Folkboat, or something along those lines. Built in China, it’s a relatively pricey boat for its size, but the word was it sailed very well. A contender for an award? Maybe. Maybe not.

With the little boats out of the way, the over-the-top Gunboat 66 came on the scene. Silver, sleek, and oozing carbon fiber, this $4 million catamaran is a serious piece of fine art. It was the showstopper last weekend, with waiting lines extending well down the dock (with waits of 30 minutes or more, I’m told). But trust me, the wait was worthwhile. For mere mortals, it’s impossible to comprehend the Gucci that is the Gunboat, but it’s just as slick under sail as it is tied up at the dock. It’s very impressive, indeed.

With the Gunboat sail coming to an end, so too was our day. It was long, busy one, as evidenced by callouses on photographer Walter Cooper’s trigger finger. Still on deck, we have the imported X-Treme 25, the Hobie Mirage Tandem Trimaran, the CW Hood 32, the Landing School 20, the Nacra F20 Carbon, the Beneteau First 30, the Alerion Sport 33, and the Topaz Race. Then, it’s deliberation time. From what I’ve seen thus far, I think I know where this one’s headed, but I’ve been wrong to predict these guys before.