How To Win the Top of the Beat

As the racecourse narrows near the weather mark, look for opportunites to make big gains. 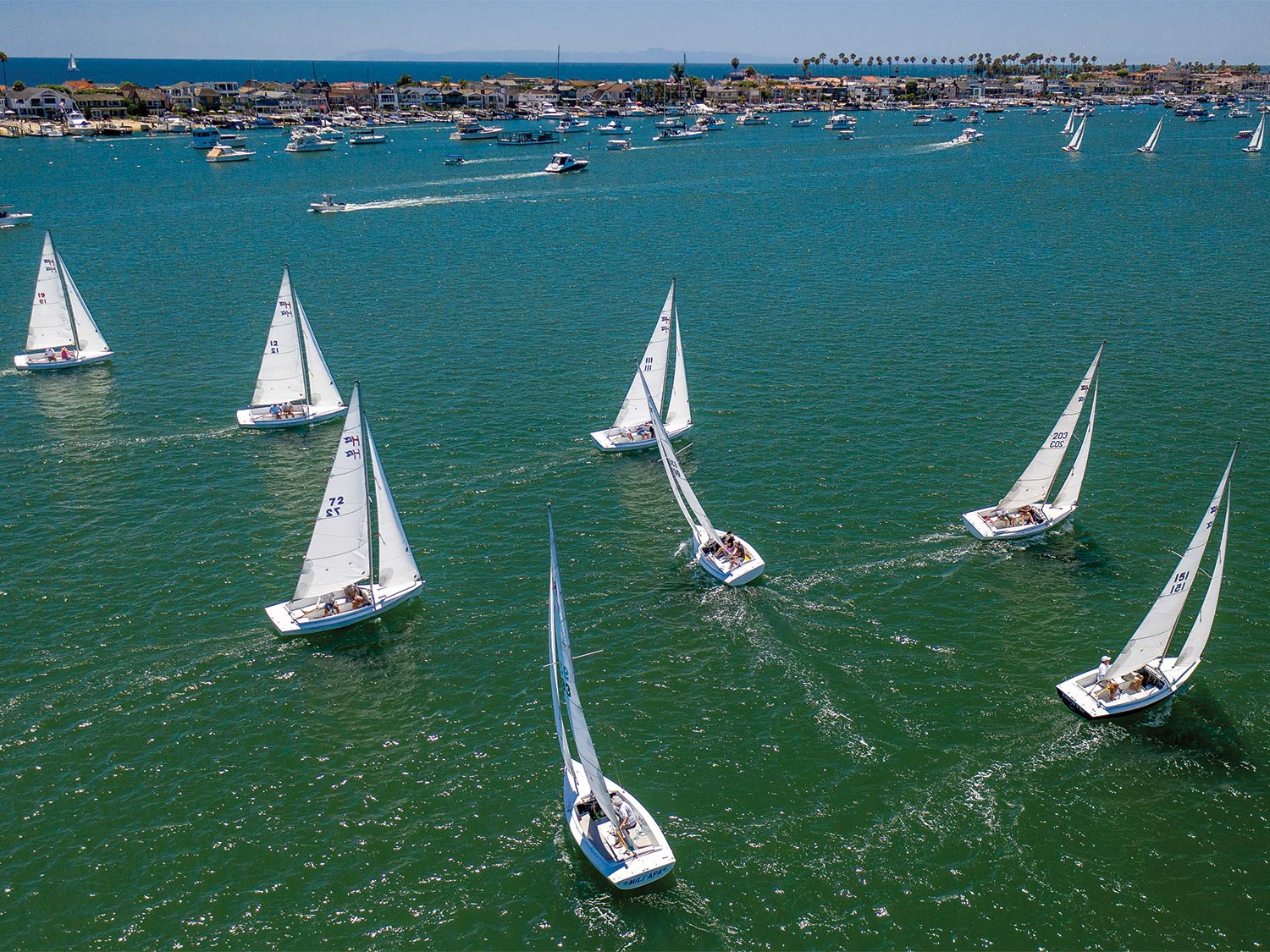 The Harbor 20 sailors of ­Newport Harbor, California, know well the importance of managing the top third of their beat. Tom Walker

It’s natural to get a pit in your stomach before the start of a big race. Even more so when the fleet is large and the line is crowded. This is partly because the boats are very close together, the closest together they will be in the race. Also, there is a perception among most of us that the start is the most important part of the race. Get a good start, and a good result will surely follow. While there’s truth in that, there is a second part of the race that is at least as important and should come with serious butterflies, if it doesn’t already. That’s the last third of the first upwind leg.

Here, at the pointy apex of the traditional racecourse, boats funnel back together and are again quite close to each other. Opportunities to gain and lose are enormous depending on how you play the myriad situations you can find yourself facing. Let’s explore some options of what to do if you find yourself in the front, middle and back of the fleet as you make your approach to the top mark.

Before we get into the details, a quick story. A few years ago, I was sailing with my very good friend, and brother-in-law, on his new J/70 Cool Story Bro (ask a teenager for an explanation of the name) in the first North American Championship for the class. We were sailing in the fall in Annapolis, which is a notoriously tricky place to sail—lots of wind shifts and current, and 90 boats on the starting line. Going into either the last or second-to-last race, we were sitting in around seventh overall. We would be ecstatic to finish in the top 10 in our first big regatta—pretty good for a brand-new boat and brand-new team.

My brother-in-law was steering, and I was calling tactics. Because we already had a bad race to throw out, I needed to be extra conservative and avoid putting up another big number. The race started, and we had a good lane on starboard heading left. Boats that had poorer starts ducked us and headed right. In the lighter air, the ­tacking angles were wide. The beat was a mile and half, nice and long to spread out the fleet at the top mark. Halfway up the beat, the fleet was separated left to right by at least a mile and half. You could not read the numbers of the boats on the far right of the course.

As we carried along on starboard tack, there looked to be a bit more wind filling down from the upper-left-hand side of the course. In my head, I knew that the farther left I went, the more risk I was taking. Looking at the breeze filling down ahead of us, I felt like a kid looking through the window of a candy store—so many bright and shiny candies, none of them good for me, but I couldn’t resist. We kept going on starboard.

We finally tacked a quarter-mile shy of the layline. Now we had at least ­three-quarters of a mile to sail on port, maybe more. If the wind held steady, if we got a little more ­pressure (giving us the ability to sail higher) or if it went left very slightly, we would be OK. We were in a position to lose if ­anything else happened.

As the odds would have it, my read on the wind was right. It filled in from the left and backed 10 or more degrees. Now we were well overstood and still had a ton of distance to sail. While we were still in the top half of the fleet, the boats that had dug back to the middle earlier were sailing less distance below us and were now starting to stack up on the starboard layline, bow to stern. We, of course, were overstood on the port layline. The situation was made worse by a strong adverse current at the weather mark. We unsuccessfully tried to pile-drive our way into the starboard line and twice could not make the weather mark, jibing around each time. We made some new friends though. Eventually we sucked it up and went behind the whole starboard lineup and rounded the mark very close to last. Luckily, the wind died and became quite shifty. We clawed our way back to the top half of the fleet and still secured a top 10 in the event.

Also, be aware that laylines are not fixed in positions. The wind is always changing direction slightly, and increasing and decreasing in speed. On all boats, an increase in wind pressure will cause the boat to sail higher and change the position of the layline for that boat. The tactician must know where the port and starboard laylines are for the highest angle the boat will sail on both tacks, not just the angle you are currently sailing. The area between these two highest-angle laylines is commonly called the “cone” and truly defines the playing field you have to work with. Do everything you can to avoid sailing beyond these upwind. Once beyond these, you cannot gain any more tactically. In the top third of the beat, it’s good to understand where the laylines are for your most lifted angles on both port and starboard tack. As a good rule of thumb, it’s normally safe to tack on to the layline at around 10 boatlengths from the mark. Kim Downing

Default to keeping it in the middle: With few exceptions, keeping to the middle as you get closer to the top mark is a strong strategy, especially if you can maintain clear air. Think of getting to the edges of the course as taking bigger and bigger risks. Yes, you might gain 1 in 5 times, but more often than not you will lose. You’re trying to win the war, not the battle. One big-number race score can really ruin your entire event.

Lead back to the middle: Once past the first half of the beat, you need all eyes (except the helm) looking out and to windward, feeding information to the tactician on the relative positions of other boats, your vicinity to the laylines, wind pressure and more. In most cases, you are ­looking for good opportunities to get back toward the middle in clear air. Many times, you will want to lead boats that are on starboard and port back to the middle by tacking on their leeward bow. By doing this consistently, you will often force them to tack, sending them closer and closer to the layline, where they are destined to lose ground and for you to gain ­distance on them.

Know when to get on the layline: If you have been disciplined about getting back to the ­middle on the second half of the beat and staying in clear air as you get very close to the top mark, at some point you will have to insert yourself on to the layline. The big question is when or how far away? One of the best sailing coaches I know, Ed Adams, thinks that you should get on the layline no more than 10 lengths away from the mark. I agree and think that is good for smaller boats, such as Etchells size and under, but for bigger boats that might need more time to set up spinnaker gear, we could increase that to no more 15 lengths. Think about how long you are willing to endure having another boat come and tack on you when you are on the layline, then create your own rule of thumb.

Be aware of the dangers of the port-tack layline. Get on the port-tack layline only when you are very close to the lead of the race. For all other situations, tack on the layline for the two-length zone to avoid the risk of fouling starboard boats at the mark. As you approach the top mark, where you are in the fleet should dictate much of your strategy.

The same principles described here always apply, but might need to be modified, whether you are in the top, middle or bottom third of the fleet. Let’s consider a few scenarios. If you’re in the top third of the fleet, lead back to the middle whenever possible. If leading, attempt to herd the boats behind you into getting on the layline too soon. Give them clear air on the tack that takes them toward the layline. Whenever possible, always sail on the lifted tack. Doing so increases your lead on the ­trailing boats, which might have to sail headed tack to be in clear air.

If you’re in the middle third of the fleet—whenever ­possible—lead back to the middle, especially if the wind is stronger. Always try to sail on lifted tack to be in clear air. The default should lean more toward staying in clear air as you get farther down in this part of the fleet.

If the wind is lighter, you might have to get to the layline earlier than you want because the wind in the middle of the course will be significantly lighter. Then it’s OK to overstand a little.

If you’re in the bottom third, keep trying to lead back and avoid the laylines, especially if the wind is stronger. You will gain on the boats that get to the laylines too early. The lighter the wind overall, the worse it will be in the middle as you get closer to the top mark. If this situation develops, you will be forced to head to the layline. Go beyond it to avoid the inevitable boats coming out that might tack on you, especially if you are in a ­slower-tacking boat.

Always be on full alert and situationally aware on the last third of the first beat. Learning to handle it well consistently is the mark of a truly solid ­tactician and team.