LaserPerformance transforms its C420 into a lighter, safer, and more responsive platform for college sailors. 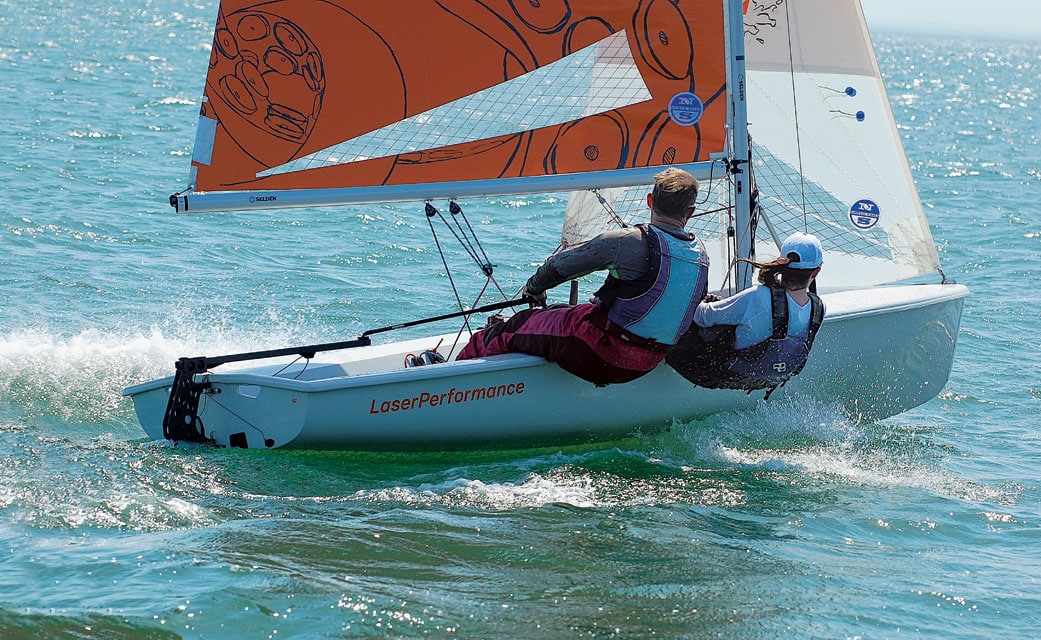 The prototype of the 420 Omega (shown here) has all the bells and whistles. You’ll see a standard collegiate rig on this lighter, stiffer Z420 hull at colleges this fall. Courtesy of LaserPerformance

College sailing is a punishing environment for dinghies. Fleets are sailed nearly every day in season, and boathandling drills in close quarters, heated team races, and full-contact mark roundings contribute to excessive wear and tear, leading to constant maintenance. These demands, plus the desire for a faster, fun, and more nimble steed, prompted LaserPerformance to rethink the C420. With the new Z420, says Adam Werblow, LaserPerformance’s director of institutional programs, they’ve developed a faster boat that can better withstand the abuse while retaining the C420’s simplistic platform.

LP has built more than 6,500 open-molded C420s over the past 40 years, says Werblow, which has given the company insight on how to best optimize the design. Issues with earlier LP-built C420s included pressure cracks on the hull, both on the rounded deck and around the air tank underfoot, and the flexing and bending of the centerboard trunk over time. To improve upon these areas, the Rhode Island-based builder now uses Soric core material and an infused molding process. As a result the Z420 hull is said to be 50 pounds lighter and 40 percent stiffer than LP’s C420. “Soric has a higher sheer resistance,” says production manager Matt Braitsch. “We should see fewer holes, a longer repair life, and more contained failure points.”

The Z420’s hull geometry should also make cracks and flexing a thing of the past. Whereas a C420 hull is composed of six pieces, the Z420 has only three molded components: the hull, the deck, and the mast partners. To strengthen where there will most likely be impact pressure, such as the foredeck and the rails, foam is infused in parts of the hull and deck early in the building process. For better hardware installation, backing plates are also integrated into the hull during the early stages of the build. What was once a buoyancy tank at the bottom of the hull is now a structural rib that runs nearly the entire length of the hull.

“The boat now has a spine,” says Werblow. “It’s a game-changer.”

The Z420 deck has more of a Vanguard 15 look; it’s angular instead of rounded, which should eliminate cracking, says Werblow. The centerboard trunk, frequently torqued by the crew’s feet during roll tacks, shouldn’t flex because it’s narrower and has additional reinforcement.

Another major change in the look of the boat is the addition of a forward bulkhead. Long Island Sound Youth Sailing Team director Steve Keen, who sailed the 420 Omega prototype—which has the Z420 hull with upgrades including a variety of more technical components (tapered mast, fathead laminate sails, adjustable mast ram, etc.)—says the bulkhead change is important. “It allows the boat to be significantly safer than some of the other boats out there,” he says. “If you take a wave over the bow of a Club 420 or a boat like that, which doesn’t have a bulkhead, and you’re going downwind, all the water rushes to your bow. It’s a vicious cycle; now the bow is taking on more water.”

The lighter hull weight also makes capsize recovery safer and faster, says Keen. “When you capsize, it comes up dry, which means you can go racing straight away, and you’re not sitting there continuing to bail. It’s going to make life that much better.”

In addition to less time spent bailing, college sailors can expect to have a faster, more enjoyable platform on which to race. I sailed the 420 Omega prototype with my fellow St. Mary’s sailing alum Megan Magill on Long Island Sound in June. Though the breeze was light, the boat was highly responsive and accelerated with the slightest puff. While it still liked a big roll tack, we were able to maintain speed through shallow tacks—like we might do during a double tack on the starting line—just as well as through wider-angle tacks.

Zach Leonard, head varsity sailing coach at Yale, noticed the quicker speeds through tacks after sailing several prototypes, both with the standard collegiate rig and the bigger 420 Omega rig. “In light wind, the boat is going to come out of tacks really quickly,” says Leonard. “In the past, the FJ has always been the team-racing boat of choice because the 420 was not such a quick tacking boat. I think you might see more team racing in this boat than you did in 420s before.”

Graham Landy, a rising junior at Yale, also had the opportunity to test out the Z420. “It’s much more responsive as far as changing your sheeting on the main,” he says. “You get more modes because it’s a lighter boat, and you can get planing in a lower wind range.”

Jib leads were moved inboard to the International 420 position on the SCV (school/collegiate version) Z420s, which will allow for narrower sheeting angles. “You don’t have to windward sheet as frequently,” says Leonard. “You only do it in a smaller wind range. The boat just points higher; it’s a different boat.”

Leonard sees the variety of modes allowed by the quick-to-plane hull as the most obvious difference between the Z420 and the C420: “You’re going to be able to put the bow down a little bit and go substantially faster.”

Brown head coach John Mollicone lined the Z420 up with his team’s C420s at a few practices in the spring. “Anytime there was a puff over 10 knots, the boat would just get up and sail away from the regular C420s,” he says. “It was definitely more lively and accelerated quicker.”

While we didn’t get enough wind during our test sail to plane, Leonard explains some of the implications. “The new boat planes upwind in not that much wind,” he says, claiming that planing upwind is possible in 10 to 11 knots. “Downwind it’s quite a bit quicker, and reaching will all of a sudden be fun. I think you might see more trapezoid courses run than we’ve done in the past.”

Landy also highlighted the tactical possibilities of reaching legs in the Z420. “Downwind it actually felt pretty similar to the current 420s when we were wing on wing,” he says, “but at our venue, which is a little wavier, we could un-wing [jib reach]. In breeze we can make big gains doing that just because we can plane on all points of sail. We can be more dynamic with the boat, which opens up the racecourse a lot more.”

While the SCV Z420s on the water this season won’t have taller masts or bigger sails, lighter hulls will power them up more quickly. “For a variety of reasons, they’re not going to upsize the sails,” says Leonard, “but I think the boats will be more overpowered in breeze, not because the sails are bigger but because the boats are going faster and creating more apparent wind; 420s are so stable it’s not a big issue.”

Landy felt more powered up during his test sail than on a C420: “I had to sail a bit heavier [with crew weight] than normal just because there was a benefit to keeping the boat flat, keeping full power longer, and planing.”

A few control-line updates will make the boat more tunable for the college sailor, such as the 6-to-1, double-ended vang, which is led to the skipper’s position. The new vang system and Sta-Master turnbuckles—used to quickly adjust shroud tension—were requested by the six colleges that had ordered fleets as of press time: Dartmouth, Jacksonville, Minnesota, Stanford, St. Mary’s, and Yale. The various features of the 420 Omega are also available à la carte. College sailors can expect to race Z420s this fall, and they will be used in collegiate national championships in 2014.

Leonard is excited that the project, which was undertaken with input from coaches like himself and Mollicone, came to fruition. “This is something a lot of us have been talking about for a while,” says Leonard, “how we need to sail boats that are training us more for the types of boats we’re likely to sail after college sailing.”
Keen, who watches his youth International 420 sailors transition to college, is also enthusiastic. “They go off to college and say, ‘No, this sport isn’t the same as a 29er or an I420 or 470,’ or something they’ve already been sailing—whereas this [Z420] is more in line with that,” he says. “Those who haven’t been exposed to this type of boat before are going to be wowed by it.”

A Class Perspective
While you’ll see the new LaserPerformance Z420 on the college sailing circuit this fall, the redesigned boat will not have an immediate effect on the large and established Club 420 Class, says John Vandemoer, the class association’s executive director. “The Z420 that LaserPerformance is producing is really geared to the high school and college market,” says Vandemoer. “It’s a very different boat; that new boat is not going to be able to compete with a Club 420 on a Club 420 line.”

However, the redesigned youth favorite might give the class some new ideas. “Will there be some changes to the Club 420 in the next few years? There’s a possibility of that,” says Vandemoer. “But are we going to change the hull and make it 50 pounds lighter and everything else? No, we probably won’t be doing that anytime soon because it would be way too cost-prohibitive. But I think the board would be open to some changes and some upgrades of the technology where it makes sense cost-wise and would be easy for the class to adapt to.”

The prototype of the 420 Omega (shown here) has all the bells and whistles. You’ll see a standard collegiate rig on this lighter, stiffer Z420 hull at colleges this fall. Courtesy of LaserPerformance
Advertisement