At the final stop of the Helly Hansen Sailing World Regatta Series, the “slower” classes continue to thrive. 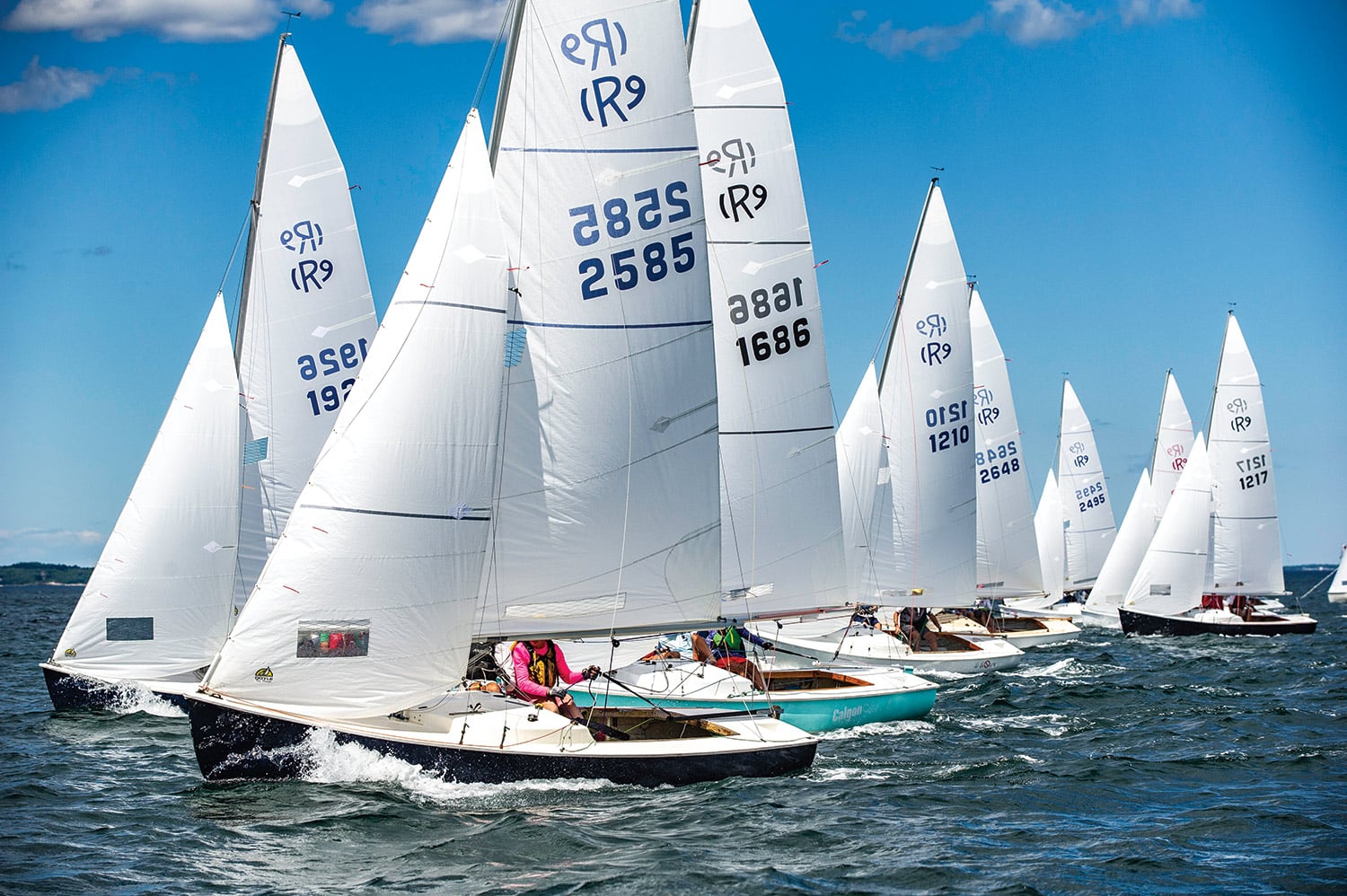 The Rhodes 19 fleet is tightly packed off a start at the 2022 Helly Hansen Sailing World Regatta in Marblehead. Paul Todd/ outsideimages.com

“Pull up a chair and get yourself a Mount Gay and whatever—actually, make that two because it’s going be a long one,” I advise the crowd that’s lingering outside the party tent at the Boston YC on a balmy afternoon in July. The sun is setting on the Helly Hansen Sailing World Regatta Series at Marblehead Race Week, and like the name itself, this traditional awards presentation runs longer than your average grip-and-grin. We would expect nothing less of a regatta that’s been running since 1889 and is the most important gathering on the local sailing calendar. Aside from the individual top three of the 10 classes at this year’s regatta, we’ve got a few new trophies, and the Marblehead Racing Association peeps have theirs as well—the perpetuals that locals cherish with a pride unique to this sailing-­crazed town north of Boston.

Before I get rolling with my emcee duties, I take a slurp from my own Mount Gay and Regatta Craft Mixers ginger beer and soak in the scene from behind the table on the stage, which is lined with Helly Hansen duffel bags, glassware and plaques. There’s an aura of happiness that fills the tent, and there’s also a healthy mix of males and females, of sailors young and old, of families and empty strollers, of tykes running amok. It’s hard to put my finger on it, but there’s something different than the other four stops of our Regatta Series.

Maybe it’s the Pleasantville-ness of the town itself that makes it seem as though I’ve been dropped into one big family reunion. But it’s more likely because of the prevalence of so many coed and family teams I’ve watched on the water, including the father-and-son pairing of Jim and Nat Taylor, who eventually win the coveted perpetual Cressy Trophy, a bronze spittoon awarded to the winners of what is deemed to be the regatta’s most competitive class.

The Taylors: Father Jim, the naval architect, and son Nat, the recent college grad, hadn’t bothered to register for the Rhodes 19 division under one skipper name or the other. They simply entered “the Taylors” in the registration name field. On the racecourse over four days, they top the hottest local fleet, which is full of top-level teams of siblings, spouses, friends and roll-tacking post-­collegiate sailors getting in on the inexpensive one-design action.

Jim, who is 73 but doesn’t look a day close to it, crews for Nat, who has the quicker reflexes to deal with all the boat-on-boat action. It also leaves the old man to tinker with the rig and jib trim, which he does best. “I’m really old,” says Jim, who’s been racing with Nat on and off since he was a junior sailor. “We were recently joking that one of the things that lured him into the sailboat racing thing was going out in Optis when he was about 10, and he went out and kicked my butt. He thought that was pretty cool, to beat Dad, so that lured him in, and we’ve been sailing together since then.”

Once Nat finished college and moved back to the area, they picked up where they left off, but today it’s tougher to win races. “I’ve been in the class since winning Race Week back in the 1980s, but it was a completely different thing back then, and the talent level [was] nowhere near where it is right now,” he says. “It’s very high with college sailors ­joining the fleet.”

But it’s not just the new-school ­hotshots getting into the old-school class that keeps the racing interesting for old-timers like Jim and everyone else. It’s also the pace of the race. “One thing we like about the Rhodes 19 is that they are all pretty much equally slow,” Jim says, “which keeps the racing close. If you have fast boats, a couple of them get away and they’re ahead by half a leg. With the Rhodes fleet, if you do it right, you gain a few lengths here and there, but that’s about it. And it can all turn around on the next leg, so being slow is an advantage in a lot of ways.”

The other popular “slow” fleet is the colorful Town class, which stands above all as the fastest-growing one-design action in Marblehead. The Town class, its historians say, has the distinction of being the oldest continuously raced fleet in Marblehead. These 16.5-foot lapstrake one-design dories—some wood, some glass—were “designed as an affordable boat for the ­townspeople, hence its name.”

Thanks to the allowance of a “trawl mooring” onto which the Towns can now tie up to at the far, shallow end of the harbor, it’s also the easiest class to get into for those lacking a mooring. For this, the Townies can thank local preservationist Bart Snow, who is credited with Marblehead’s Town class revival.

“Back in 1954, we had about 60 boats, and they sailed Race Week in two divisions,” Snow says. He was one of them and later rejoined the fleet in the 1990s, which had since dwindled to 10 boats. About a decade ago, however, Snow began collecting used boats and fixing them himself.

“I soon realized I didn’t have time to do that, so I sold some to other people to fix, and that didn’t work well because they would always do it ‘next year.’”

He now leaves refurbishment of recovered Townies to the craftsmen of the Pert Lowell Company in nearby Newbury, Massachusetts, and he and other stalwarts are always on the hunt, scouring the internet and conducting recovery missions in places as far as Ohio and Kentucky. But they’re mainly found in barns and lake houses in Maine and New Hampshire. The fleet is now up to 45—and growing—but there’s one new requirement when recommissioning. “They were all white 10 years ago,” Snow says. “I tell people that they have to paint it something other than white, so when they are sailing up the harbor to get to the starting line, they are quite noticeable.”

With only a main and a jib, there are few strings to pull, and the boat can be sailed by two people with minimum fuss or skills. “It has a weather helm, so we move the mast forward to take the helm out,” Snow says. “Over the years, there’s been some changes to the specs to make them go faster, changes like extending the skeg and making the centerboard slot smaller, but they don’t plane and they’re easy to sail—all you need is a friend to come along.”

For this year’s Helly Hansen Sailing World Regatta at Marblehead Race Week, there were 18 Towns that competed over four days, two of those at the upper limit of the class wind range. The top boat after seven races was skippered by local sailmaker and national champion Chris Howes on Believe It or Knot. Snow crewed for Howes, which ruffled some feathers on account of there being too much talent in such a little boat.

Be that as it may, Howes and Snow only won by a single point, and they had to work hard to get it on the final day. “The Town class is mostly families and kids, and all types who just want to race,” Snow says. “We race more than any other class [in Marblehead], four days a week. Many of the sailors just race to sail; they want to be on the water.”

I suppose that’s the vibe I was picking up before starting the awards. As crazy as it sounds, that aura of bliss was exactly that: Everyone was just happy to be on the water, together with friends and family once again, checking off another Race Week and living their best Marblehead lives, no ­matter how fast or slow they go.