Citing a lack of available boats and escalating costs for new builds, U.S. Finn stalwarts are taking matters into their hands. 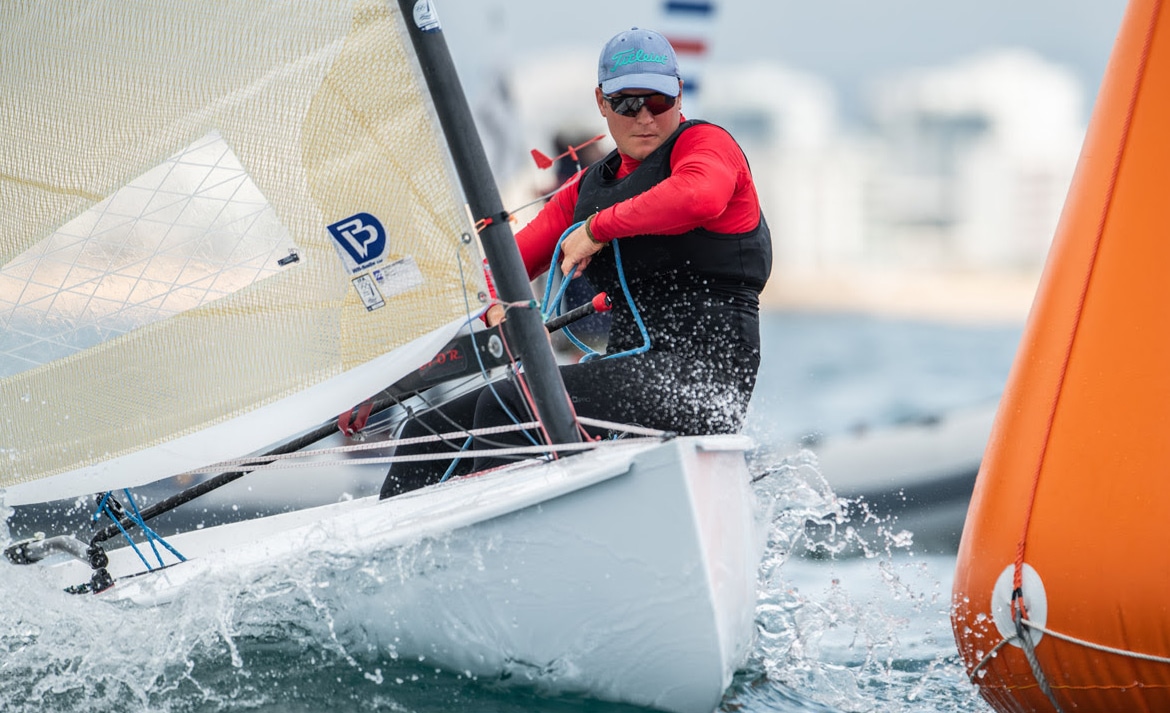 Joan Cardona, of Spain, one of the young standouts of the international Finn class at the Finn European Championship in Vilamoura, Portugal. Joao Costa Ferreira

If you build it, will they buy it?

The USA Finn Association is betting they will, and to hedge its current bet, they’ve raised more than $20,000 toward the goal of producing reasonably priced, readily available Finn dinghies in the United States, something that hasn’t happened on a significant scale since the last Vanguard Finn rolled out of the Pewaukee, Wisconsin, factory in 1984. Since then, European builders, particularly the Italian company Devoti, have dominated the market.

The hope is that a U.S.-built Finn will make a small but very active class even stronger. There are currently fleets in San Diego, Alabama and Detroit, and the class’s major events, such as the 2019 Midwinters with 33 boats, often attract a significant percentage of the class’s 100-plus membership—a very healthy sign.

Like any boat, the Finn is not for everyone, but the Finn Foundation, organizers of the new build plus other class initiatives, has concluded there is a significant market for the boat. Apart from the attraction for those looking for the physical challenges a Finn offers, they point to the growing number of big-boat sailors who want to move on to a simpler racing program, as well. Other indicators, such as statistics provided by healthline.com, show that more than half the male population in the States weigh more than 200 pounds—perfect for the Finn. Plus, flexibility in mast choice (more flexible for lighter sailors, stiffer for the heavyweights) and sail design allows a relatively large range of body types to be competitive in the boat.

There’s also a healthy secondhand Finn market in the States. But it comes with a hitch. What’s available, says Rodion Mazin, the Class secretary, are boats from 1960 to 1970 or boats from 2000 on. “Everything is either too old or too expensive,” he says. “And the high price of new boats from Europe drives the secondary market prices up, so it’s expensive no matter where you look. The plan is to offer a boat in the $12,000 to $14,000 range, which will create a snowball effect, driving the price of the secondary market down and making boats more affordable.”

Part of the problem is that a North American sailor who wants a new Finn is hit hard with tariffs, shipping and other non-boat-specific costs. According to US Finn Association President Peter Frissell, those can add 35 to 40 percent to the price of a boat, bumping it up to a staggering $30,000. Multiple boats can be shipped in an 8- to 10-boat container and save some of the shipping costs, but according to Frissell, few people want to front that kind of money.

Enter the Finn Foundation, a nonprofit branch of the USA Finn Association. “Our goal is to keep the total cost—hull, mast, sail, covers, dolly—under $20,000,” says Frissell. And, of course, to make new boats readily available.

They’ve teamed up with Beacon Composites, a North Carolina company that is also a new builder for the Thistle class. “We were looking around for someone who is not too big because of all the associated overhead,” says Mazin. Beacon Composites fits the bill.

Half the battle is already won, as the Finn Foundation owns the molds for a Lemieux-designed hull, which has been around since the 1990s, but is still held in high regard. “We’ve done a lot to improve the molds. We had them laser-scanned, not so much to change the shape, but so we could look at the symmetry, the fairness, make sure there’s no twist,” says Frissell. “With this technology, which was not around when these molds were made, we’ll be able to clean things up a bit.”

The next step was bringing it into the 21st Century. “I gave the University of Michigan School of Naval Architecture a call, and they said they’d love to have their students work on this project,” Frissell says. “They now have one team that’s doing CFD (computational fluid dynamics) analysis on centerboards and another focusing on construction aspects of the hull, including modernizing the deck.”

The molds are now at Beacon Composites, and final prep on them will begin this spring. They will also be building the rudders.

Masts, no small cost in a Finn, will still have to come from overseas. “We’re doing this as a two-step process,” Frissell says. “Getting the boats built is enough of a challenge. And there’s a huge amount of technology in masts. So it’s a bit much to chew on all at once. We hope to get resources together to import about 10 masts at a time; it will be more efficient.”

The ultimate goal is to source a domestic mast builder, and according to Mazin, initial talks are underway with several possible suppliers.

Getting a builder online for any new boat involves substantial start-up costs, and apart from providing the hull molds, the Foundation eliminated the front-end investment by documenting all Finn-specific parts and providing that information at no cost to Beacon, which will be able to produce a lot of those on their CNC machine. Additional start-up costs are being covered through the Foundation’s crowd-funding efforts.

It’s all part of the USA Finn Association’s larger strategy. “We want to make the boat available to a wider range of sailors and get more people sailing,” Frissell says. “At one end of the scale, we find older boats—if we can get donations, we take those—fix them up and get them in the hands of young sailors. At the other end, we want to have a builder here to keep new boat costs down.”

“We’re not looking to build a Worlds-winning boat, but we want something competitive on the national level, at a minimum,” says Mazin. “Or, something people can charter if they come here for an event, like the Gold Cup [the class’s world championship] or the Worlds Masters.”

And that takes us to the Olympics—or lack thereof for the Finn, once the 2021 Games are in the books. For Frissell there is a silver lining. “It will probably reduce the impression that the Finn class is an arms race, which is consistent with what we’re trying to do.”

Frissell also hopes that the first U.S.-built boats will become available by the end of 2021: “We’re thinking that with increased availability and lower costs, we’ll see the growth we’re looking for.” A Florida yacht club has also put a bid in for the 2023 Gold Cup, which could also spur interest in the boat.

“The attitude that Peter and I and the Finn Foundation have is that if you’re not going to do anything, nothing’s going to happen,” says Mazin. “You have to be proactive, and that’s what we’re doing.”

In the 1960s through the early 1980s, the class drew between 40 and 60 boats to major events, such as the North American Championship. That was also a period when there was at least one U.S. Finn builder. Here’s hoping history repeats itself.