A fire over the weekend at Abbott Boats destroyed production facilities, molds, and numerous finished boats. 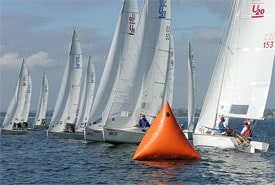 Abbott Boats Inc., the Sarnia, Ontario-based builder, was destroyed by fire over the weekend. The blaze, which leveled two separate buildings, destroyed tooling for a number of one-design classes. Worse, however, was far-reaching impact on the Abbott family-run business, which has been in operation for more than 50 years. According to reports in the The Sarnia Observer, the cause of the fire is still unknown, and the investigation had been hampered by continual flare-ups earlier this week. The Observer also reported that all five of the city’s fire stations responded to the fire shortly after 7 p.m. on Saturday. As the fire consumed one building and several boats, residents in nearby apartments were evacuated. A second and separate fire, reportedly upwind of the first, then broke out early in the morning, leveling the woodworking and finishing shop. “My molding shop was fire No. 1,” said Abbott when reached by phone on Thursday. “All my molds are gone-Solings, Ynglings, Martin 16s, Ultimate 20s, and Wayfarers. My 420 molds, too. We got hit hard. “The second fire took all the production I had ready for delivery. Finished boats, my assembly shop, my woodworking shopeverything. The building burnt from front to back.” Abbott says he was near the facility on late Saturday afternoon, helping Brad Boston pull out a brand new Ultimate 20, bound for the North Americans in Oregon. Today, he’d set up office at a nearby fire station and could not comment on the investigation, saying, “I can’t tell you what they’re doing kicking around in what’s left out there. “This is very hard. Everyone says we have to keep going, but we’re a tight family business, and a lot has to be considered now. The Ultimate 20 group has told me that they don’t want to loose their builder, and they’ll do anything they can to have me building again as fast as possible. That show of support really helps shape the future for us, but we have to assess everything, not just for ourselves. Our customers know they weren’t just buying boats from us, they were part of the family business.” One customer, speaking off the record, said the class was devastated by the news, but was waiting to hear what Abbott would do before making any decisions. Jeff Canepa, of SailSports Inc., which markets the Ultimate 20, says he’s doing everything he can to get Abbott back online. “We still have all the plugs [in California], and our builder in Italy has templates. They’re already making another set, and, between Italy and myself, we’ll have everything Bill needs to start again. I told him yesterday that whatever happens, whenever he’s ready I’ll send him everything he needs to be back into production before then end of the year.” Abbott says his own office is still standing, only singed on the outside, and that it is somewhere from which to start, but he’s still dwelling on what he and his family have lost. “I think the hardest thing is that our lives are there; our personal boats that we just brought in to get ready for our own sailing season-they went. My racing stuff went, my new Soling went, all my rigs. There were my duck decoy molds, too. All of it is hard hitting. Everybody’s home now, we’ll be putting on our work boots, and regrouping.”