Salona 45: A Cruiser Fit to Race

You owe yourself a look at this European gem. 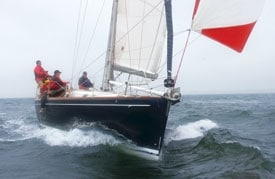 In the best of all possible worlds, sailors who enjoy both racing and cruising would own two boats. The raceboat would be a flat-out rocket ship, the cruiser a well-equipped luxury performer. Reality, however, prevents most of us from realizing such Zen-like balance, so compromises are necessary. With compromise comes the sinking feeling of settling for less, but last fall, on a windy day on Chesapeake Bay, we sailed the Salona 45, a cruiser/racer created with seemingly little use of the word “compromise.”Designed and built in Croatia by J&J Design and AD Boats, the Salona 45 is a bit of a throwback. Eschewing the non-overlapping headsails of modern designs, the Salona carries a 130-percent masthead genoa on a three-spreader, aluminum Sparcraft rig. Big headsails and masthead kites mean more grunt in the light stuff, which works well, percentage-wise, for most venues in the United States. The Salona should hang tough in windy venues as well. By using uni-directional, bi-axial, and tri-axial fiberglass cloth in the hull laminate, and foam core (to just below the waterline), the boat is relatively lightweight. Three stringers per side, three ring frames, a grid cored with marine plywood, and bulkheads and interior joinery bonded to the hull, make the boat strong and also contribute to its stiffness. There are two safety features not ordinarily found on recreational vessels; fore and aft bulkheads that, according to the manufacturer, are true watertight compartments-wiring or plumbing passes through watertight glands. The aft bulkhead is forward of the rudder stock, so, theoretically, even if the rudder drops out of the boat, water shouldn’t breach the interior.The Salona 45 we sailed last fall had the two-wheel option, but the boat is also available with a single, 60-inch,carbon-fiber wheel. We liked the twin-wheel approach for two reasons. Racers will appreciate the better visibility, while cruisers will enjoy how easy it is to get from the transom to the companionway.A transom locker is secured with four screws, and is easily removed. It’s a simple way to increase storage when cruising while keeping the stern light when racing. A Harken traveler sits on the (teak optional) cockpit floor, directly forward of the helm, and is flanked with two Harken mainsheet winches for the grand-prix style mainsheet. Genoa gear includes Harken jib tracks, tight against the deckhouse on each side, and two Harken 44 winches. Two banks of Spinlock XTS jammers, one on each side of the companionway, should make any pitman happy. Overall, the cockpit is roomy enough to accommodate a racing crew, despite the deckhouse extending relatively far aft. There’s molded non-skid on the deck and on part of the deckhouse, and it works well. There isn’t any non-skid in the area where halyards lead back to the cockpit, and considering it’s an area where crew will be standing when reefing the main, there should be non-skid there. Racers might want to consider two options: no toerails aft of the shrouds and retractable cleats amidships. The half-moon foredeck hatch seems too small to easily stuff spinnakers or headsails, but adrenaline works wonders when it comes to sail retrieval.An open pulpit flanks an anchor roller (three fasteners, easily removed) and an immense anchor locker. The boat we sailed had a standard spinnaker pole and symmetric spinnakers, but a retractable sprit pole, mounted to starboard, is available. Get both, and enjoy the option of sailing with either symmetric or asymmetric spinnakers. Driving the Salona 45 was a pleasure. The steering was light, responsive, and the boat was balanced in 20-knot puffs. Under power, we managed 7.5 knots at 2,100 rpm, and engine noise was negligible. The backdown was OK, but would’ve been better if the boat had been equipped with the optional three-blade folding prop rather than a two-blade folding unit. The boat we sailed was equipped with a saildrive, but a shaft is available as well. In fact, there isn’t much the Salona yard won’t do if asked, whether it’s interior layout or equipment changes. The Salona’s standard keel is iron and draws 6’8″, with an aft-swept lead bulb. An optional racing keel has a T-bulb and draws 8’4”. The rudder is deep, too, and has enough area to minimize the occurrence of broaches and wipeouts. Try as we might, we couldn’t get the boat to misbehave, no matter how hard we pressed it. The Salona is well-mannered, but no dullard. We logged a solid 7.5 knots upwind in 16 to 24 knots of breeze. Off the wind, the 45-footer was a good performer, showing 8 knots and more on a reach. The boat’s interior is available in three different layouts, and appointed in either mahogany or cherry. The galley on all versions is Euro-style (stretches from the aft head on the port side to the forward bulkhead). While this configuration doesn’t provide the security that J- or C-shaped galleys provide offshore, it’s perfect at the dock or on the mooring, and gives the salon a roomy feel.The forward-facing nav station is to starboard, abaft the companionway, and it sports one of those CE-influenced (Council of Europe, a standards group) electrical panels we’re crazy about. It’s easy to open, and the wiring is tidy and clearly labeled. Forward of the nav station is the settee and a table. A small bench on the inboard side of the table slides away to reveal an impressive number of large, stainless steel keel bolts, and opens up the cabin sole for sail stowage during racing.We’ve sailed more than a few 40-footers in the past few years, and for the most part, all were capable, well-built boats. The Salona 45 stands out from the crowd for several reasons: price, workmanship, attention to detail in design and construction, and a willingness by the yard to accommodate buyers. If you’re thinking about a cruiser/racer that comes complete with an endorsed IRC certificate, but will also be right at home on the yacht club cruise, you owe yourself a look at this Eastern European gem.