Skip to content
Advertisement
Racing Racing on the Outskirts

Racing on the Outskirts

Flathead Lake, Morro Bay, Monterey Bay, Stonington Harbor, Lake Ray Hubbard and the Charles River in Boston. They’re not exactly mecca racing venues the likes of their more widely known neighbors such as San Francisco, Newport or Marblehead. But at sailing enclaves like these lesser knowns around the United States, sailboat racing thrives with rich, eclectic and passionate fleets, and competitive racers. They’re out there to discover, and award-winning photographer Onne Van der Wal has struck out across the American landscape lately for the soon-to-be-published photo book “Sailing in America.” He takes us on the road and detours down a few new side roads and onto racecourses we don’t hear about every day. I never knew this place existed, but when we were researching our West Coast stops, I saw this and had to find out more about it. It’s beautiful here and a really unique place. The rock is what grabbed my eye because it’s just so massive, and it sticks out from miles away. In its shadow is this massive lagoon where there were lots of cruising boats anchored. To be honest, I went here to take a picture of the rock and maybe find a few boats on moorings; I had no idea there would be people out sailing. It was early spring and when we got there EARLY in the morning it was foggy, but the hotel receptionist told me it normally burns off by 10 a.m. It did, and in the late afternoon these three dinghies appeared out of nowhere. They were doing drills and short tacks on a whistle, going upwind. For small boats, especially, the bay seemed like it would be an excellent place to run a regatta with its beautiful, flat water. The fog came and went and the conditions kept changing. The landscape is so different, and something I’m not used to seeing. It was so refreshingly different than what I shoot on the East Coast. My son is in his second year at Northeastern University and sailing for the school. He said I should come in the fall and shoot because it’s so beautiful. They sail out of the MIT Sailing Pavilion, which is an amazing facility in and of itself. This October day was classic New-England-fall perfection, with 50-degree temperatures, a stiff northly breeze and puffy white clouds. There was lots of action on the river, and we were right in the thick of it. When I was out on the water, I kept thinking “what a magical place to sail,” and this was my first time shooting a college regatta. What amazed me most was the level of sailing. On the docks, it’s packed with boats, sails flapping and 20 different teams from New England. Everyone’s walking around in dry suits shoving back hot dogs and hamburgers, with parents, dogs and coaches hanging around. It’s a wonderful scene, and behind it all the city is business as usual. With the puffs coming through buildings it was really shifty, tricky sailing. The scene was amazing, with all the chaos and action on water and this beautiful background with the buildings, the bridge and the commuter train running past. The city was just so busy and energetic, like racing itself. When the “Sailing America” book project came up, the first thing that came to mind was scows on the lakes in the Midwest. Minnesota’s Lake Minnetonka and the A scows was what I really wanted. I’d seen the pictures and I had this vision of the killer A scow shot: two boats tight, reaching with big asymmetric spinnakers. The As are amazing boats, really tricked out, and how they’re sailed is incredible. It was beyond what I expected. Before we went, we called around and were quickly adopted, housed and treated like royalty when we got there, which is such a Midwestern thing. We had absolutely beautiful weather the entire time, with great breeze to show how over canvassed these things are, and how the crews hike their butts off.

I’d heard so much about this part of the country and learned, like so many other places, what fanatical sailors they are. These boats are their pride and joy and the whole scene is made up of such a passionate group of super, friendly Midwesterners. On the water, though, they are extremely competitive, with many young people, guys and gals, who are very good sailors. Once they crack off at the weather mark and set their massive kites, they go so fast. The lines of the boats, the high-tech sails and the venue is unique — and what it makes me realize is how there are so many beautiful clubs, regattas and boats in pockets that us coastal snobs would never know about. Here, I was blown away by it all. My wife Tenley and I were cruising at the end of the summer on our Pearson sloop Snoek and stopped at Stonington Harbor. After we picked up a mooring, I learned it was the last night of the local evening-beer-can racing series. I was like, “bingo.” It was a classic summer evening with great light, the soft southwesterly and all that good stuff. I grabbed my bag and a few lenses and set off on my own in our 11-foot dink, putting through the fleet with my little 4 hp outboard, which is more like a fan than motor. It was such an eclectic mix of boats: Lasers, Sunfish; 420s; S boats; a big wooden Herreshoff design with one guy sailing it; lots of small boats with sailors old and young, with the old codgers running the races. It was such a cool scene and I was lucky to be there that evening with such magical conditions in a beautiful setting. Some people were totally serious and there were ­others who ­probably drank more beers than they actually tacked. The mix of the fleet was the most striking part of it, though. To me, the whole beer-can-racing scene absolutely sums up sailing. It’s more fun to shoot than regattas where everyone is way too serious. I was out for a while and went back to the boat, started the barbecue and kicked back in the cockpit. We’d planned this visit to capture the two Herreshoff-designed Q Boats that we’d been told sail on the lake. When we got there, we started ­poking around and ended up driving around the entire lake. We saw this cluster of masts, went to see what we could find and came upon North Flathead Lake Yacht Club. It was early in the season so it was quiet and there were just a few boats going out sailing. We had no contacts here, but when we started talking to people we quickly found connections from back home in Newport, Rhode Island. The sailing world is a small one for sure. We could have spent a week here, it was just so beautiful. With snow-covered mountains in the background, there’s no mistaking you’re in Montana, especially with the sound and smell of the wind blowing through the pine trees, the color of the water and the smell of the freshwater. It was a different scene from anything I’d ever shot before, and the quiet and solitude was amazing. Because it was early in the season, there were lots of people working on their boats; many old-school fiberglass boats. With the Performance Handicap Racing Fleet racing, there’s a great vibe and everyone is so welcoming. We were in Texas to shoot a VX One regatta on Lake Ray Hubbard, a big, man-made lake lined by rock walls. The sailing was done for the day and I was sitting up on the stoop at Rush Creek YC having a beer. I look over and these MC Scows are out sailing and the sun pops out, so I put down the beer and grab my camera. I’ll admit, it’s not the most visually stunning place to sail, but these guys are fanatical. There wasn’t much wind and there were eight or nine of them out, but with the backlight it was beautiful. Driving in from the airport in Dallas, I thought about how barren this part of the country is, but this yacht club and the lake are like an oasis. With a big city nearby, this is a place where people come sailing and have a blast. It’s a really cool scene in that you’d never think there would be competitive racing in the middle of Texas — but there is, for sure. It’s a whole different scene with cowboy hats, boots, big trucks and big fun onshore. It makes you realize how varied the places we sail are. Monterey was a planned stop on our West Coast trip, because we’d heard the fleet and the scenery were really good. They sail out of Monterey Peninsula YC, which is a small club on a pier. You can smell the seals everywhere. There’s the iconic canning factory and the aquarium and such nice scenery in the background. As a sailing venue, it’s really exposed. It may be a bay, but it felt like being in the open Pacific Ocean. Most of the racing was along the shore, but like with so many other Northern California venues, the water is cold, there are big swells and the sailors are fully decked out in foul-weather gear — it’s made for hardcore sailors like these. I was early in the spring season and the whole vibe was so welcoming. These are hardcore sailors here, but there are plenty of young, good-looking guys and gals mixed with the old‑timers that just really enjoy sailing. The bulk of the boats were 20- to 30-foot 1980s-vintage, many of them with old sails and leeches flapping, which gave it a unique look as well. It was a magical place and nice to shoot somewhere so ­different than what I’m used to. 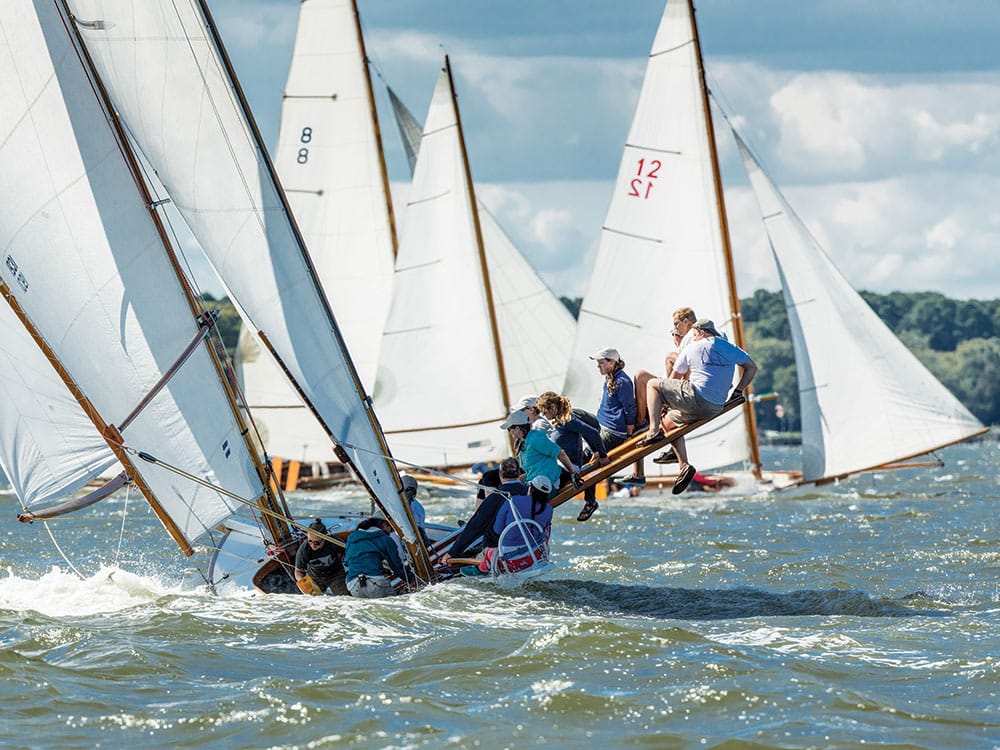 What I’d seen of the Chesapeake Log Canoes was fascinating. I always wondered why they sail these massively over-canvassed things with a bunch people hanging out on a plank. Like other places I’ve visited, these are fanatical people with really old boats, 100 years old or more. The shapes are vintage 1900 and they’re handed down from family to family. The day we got there, on the Miles River, they were launching them off the beach with tractors. Everyone’s standing waist deep in warm soupy water, rigging the boats. It was such a different scene; not one I ever expected. They looked extremely difficult to sail. When they would foot off too much, the boat would bowl over, then, if there was a lull and everyone’s out on the board, they were swimming. There was a lot of capsizing and swimming, which reminded me of Bahamian sloop racing. The skill required to sail these boats well was very apparent. There’s nothing high-tech, but the people just love it so much — it’s their identity — and the scenery is quintessential Chesapeake ­shoreline: green, peaceful and laid back.